Yes, it has been an awfully long time since I have been away. Thank you to those who have missed me, checked on me and encouraged me to come back. It means a lot and thank you for being there! I have missed sharing my thoughts and recipes on this platform.

I am looking forward to sharing some of the food that I have been eating and cooking. Let’s start with rice dish – a staple in my house.

Did I ever mention my dislike for raisins? I am not, I mean, really NOT fond of raisins. No, not even a bit. On the other hand, little V, who, by the way, is not that little any more, can survive on raisins alone. That is, if he had his way 🙂 He can have as many raisins as he can get his hands on.

I was cooking a quick + less effort lunch for us one week day when I thought of adding raisins in the pulao (pilaf) to please him. But to my surprise, he suggested dried cranberries instead. I immediately jumped with joy and happily took his suggestion. His love for cranberries comes a close second to raisins. So, there you go! We had a win-win situation.

When my rice was soaking and I had some time to think, I just happened to glance on the bottles of sunflower and pumpkin seeds which were kept on the kitchen counter and I normally add to oats for breakfast. I thought – why not?! So there we go, at the end of it, we had a beautiful and crunchy twist to the usual Pulao. I roasted them in a little bit of ghee together with half of the dried cranberries and added them as a garnish. It gave the Pulao a whole new dimension! 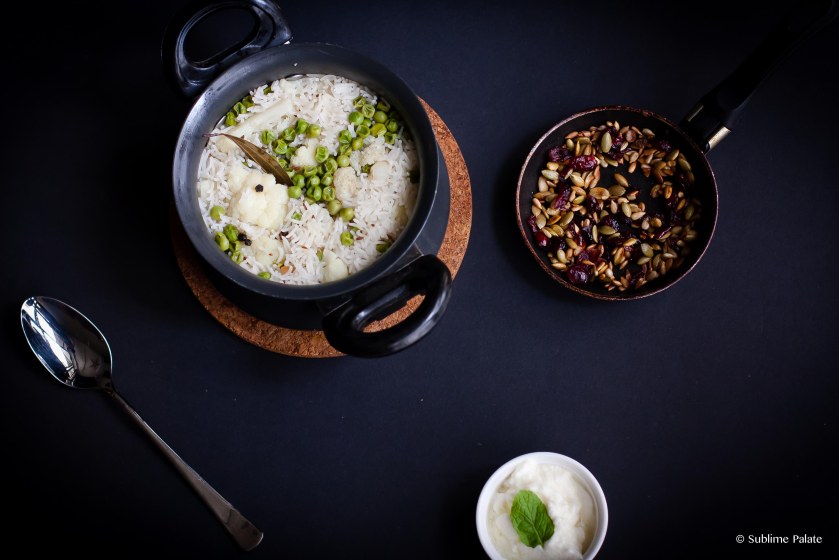 Rinse the rice with water at least twice. Soak the rice for 15 mins. At the end of 15 mins, set it aside to drain for 10 mins using a strainer. Put about 2-3 cups of water to boil which we will need later.

While my rice was soaking, I soaked 1/2 a cup of frozen peas in water for at least 10 mins.

Now that the peas were taken care of, I quickly went on to cut / break cauliflower into about 8-10 pcs of of medium sized florets. I also roughly chopped the cashew nuts in halves. When these were done, I put my garam masalas aside to make sure I had everything ready when the pot went on!

I heated half a tsp of ghee in a pot in which I was going to make the pulao. I added the cumin seeds and all the whole garam masalas.

At this point, I lowered the heat to make sure they don’t burn. When the garam masalas start to emit a nice aroma and before they burn, I added the cashew nuts and half of the cranberries. Make sure you stir it continuously and keep the heat to low. It’s really easy to burn them at this stage. When they get a nice color (1-2 mins on low heat), it’s time to add in the vegetables.

Add the peas and the cauliflower florets with the heat on medium. Fry for another minute. Next, add the rice and mix it without breaking it to make sure the rice is coated with every bit of ghee there is in the pot.

Now carefully add 1 and ¼ cup of the boiling water and salt. Gently mix and taste for salt. A pulao is never too salty, so go easy on the amount of salt you add. Quickly lower the heat to the lowest mark, cover with a tight lid to not allow any or minimum steam to escape during this process. Set your timer for 11 minutes.

Meanwhile, heat a little ghee in a small frying pan. Have your sunflower seeds + pumpkin seeds + remaining dried cranberries ready by your side. 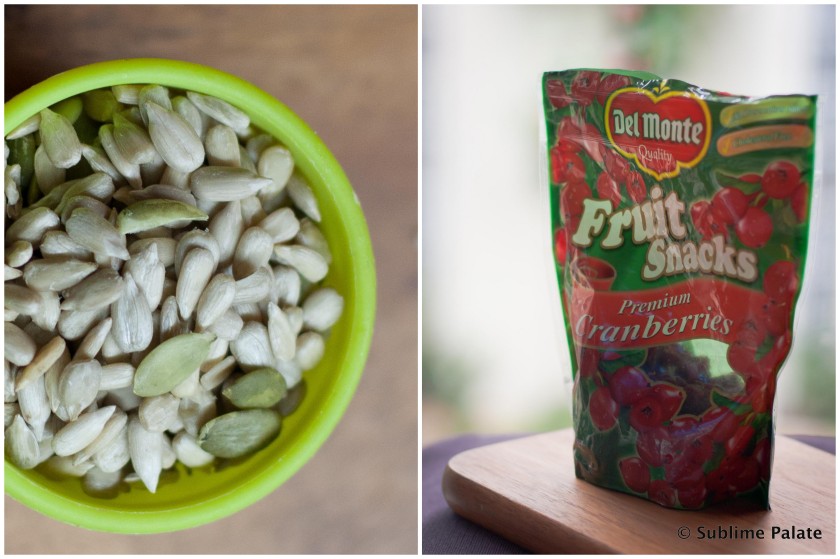 As soon as the ghee melts, add these beauties and fry them on low heat until the seeds get a nice warm golden color. The cranberries just swell up a little and they look absolutely gorgeous.

At the end of 11 minutes, turn off the heat from the pot of Pulao. Now, I know if you are like me, you’ll just want to open the lid to see what happened in there, but hold back for just  5 mins more.

Open the lid when it’s rested. Your Pulao is waiting to be garnished and served.

Garnish with the cranberry, pumpkin and sunflower seeds we fried earlier and serve immediately. This can be eaten as part of an elaborate meal with a spicy curry. It’s really that simple and you can include it very easily to make any regular weekday meal a little more exciting. Have it with some achaar (pickle) and yogurt / raita.

Notes:
– Add the cashew nuts as a garnish and fry it together with the cranberries and seeds instead of adding it in the beginning. That helps to add more crunch.
– Now if you are like little V, you could have this entire dish with raisins in place of cranberries.
– In it’s simplest form, you can make the cauliflower and peas pulao without any cashewnuts, cranberries, sunflower seeds or pumpkin seeds. Follow the same instructions but skip these ingredients.